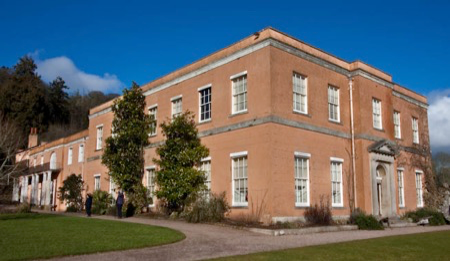 Killerton, near Exeter in Devon has a history long intertwined (since the 1620s) with the Acland family, who were increasingly wealthy and always politically active, each generation through the eighteenth and nineteenth centuries serving as an MP. As the their main home until 1944, the house has seen many changes and alterations over the years. Today’s Georgian manor was completed in 1779 for Sir Thomas Dyke Acland, the 7th baronet (1722-1785). A decade earlier the gardens had been reworked by landscape designer John Veitch. In 1778 his oldest son, John (1746-1778), returned home from America together with his wife and two children. Unfortunately John died that same year, leaving his widow, the formidable Harriet, to raise her infant son and young daughter. The boy inherited the estate at the age of 7, following the death of the 7th baronet in 1785, but he only survived his grandfather by a few weeks, title then passing to his uncle, Thomas Dyke Acland. He closed up the recently built Killerton and lived at Holnicote, an estate closer to Exmoor, which offered a more convenient proximity to his favourite pastime, stag hunting. He was, however, one of few within the family who did not see Killerton as their main home. In 1944 Sir Richard Dyke Acland, 15th baronet, gave Killerton estate to the National Trust.